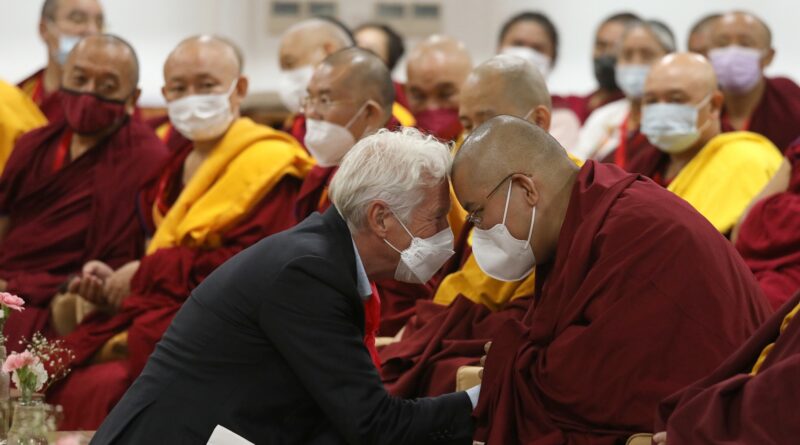 By Vishal Gulati
Dharamsala, July 6 American actor Richard Gere on Wednesday cut cake in Dharamsala to mark the occasion of Tibetan spiritual leader the Dalai Lama’s 87th birthday and said “once in a millennium, maybe in two millennia, such a person, such a human being as the Dalai Lama emerges and he is a Tibetan”.

The birthday was celebrated at the Tsuglagkhang temple, the main Buddhist temple close to His Holiness official palace at McLeodganj, where Himachal Pradesh Chief Minister Jai Ram Thakur took part virtually as the chief guest.

Making a clear-cut departure from the policies of the successive governments of ‘making distance’ of sorts from the Tibetan spiritual leader by extending greetings to him for the second consecutive time, Prime Minister Narendra Modi extended his greetings.

In a tweet, the Prime Minister wrote: “Conveyed 87th birthday greetings to His Holiness the @DalaiLama over phone earlier today. We pray for his long life and good health.”

Beijing regards the Dalai Lama, who is based in the northern Indian hill town Dharamsala in Himachal Pradesh, as a “separatist”. It is sensitive to him meeting international leaders, attending official functions or visiting places at the invitation of the Indian government.

Thousands of Tibetan exiles and foreigners on Wednesday morning joined in the birthday celebrations of their spiritual leader, the Dalai Lama, who inaugurated the Dalai Lama Library and Archive here.

Large crowds began to assemble since morning at the Tsuglagkhang temple for the birthday celebrations.

The Dalai Lama, revered by the Tibetans as a ‘living god’, attended the prayers held at the hilltop temple.

The special guest, Richard Gere, also spoke to the gathering amidst the presence of Penpa Tsering, the Sikyong or head of the Central Tibetan Administration (CTA), by saying, “Tibetans, you should be proud” since “once, not in a lifetime, once in a millennium, maybe in two millennia, such a person, such a human being as the Dalai Lama emerges and he is a Tibetan”.

“Hence in that context of knowing, we all have to step up,” said the actor, while recollecting his first visit to Dharamsala 40 years before as well as his experiences during the conferment of Noble Peace Prize to His Holiness the Dalai Lama in 1989 where His Holiness talked about the mankind’s responsibilities towards the earth and its environment.

Puri described the Dalai Lama as a “long standing friend of India” and the “Bodhisattva of Compassion”, and said in a tweet, “His quest for world peace & non-violence is an inspiration for humanity.”

Himachal Pradesh Chief Minister Jai Ram Thakur, who virtually attended the celebration as chief guest, lauded His Holiness’ contributions in making Dharamsala known to the wide world through preservation of Tibetan religion and cultural heritage in the host state.

The guests of the event jointly cut the ceremonial cake after the chief guest’s address.

Acknowledging the celebration of the birthday with the Dalai Lama and the inaugural of the new Dalai Lama Library and Archive prior to the official ceremony, CTA President Penpa Tsering highlighted the inability to celebrate His Holiness’ birthday inside Tibet despite Tibetan in Tibet’s wishes due to unabated restrictions by the Chinese government.

Born on July 6, 1935, at Taktser hamlet in northeastern Tibet, the Dalai Lama was recognised at the age of two as the reincarnation of the 13th Dalai Lama, Thubten Gyatso.

He fled Tibet after a failed uprising against the Chinese rule in 1959, basing his government-in-exile here that never won recognition from any country.

Catamaran’s Cloudtail back on Amazon India