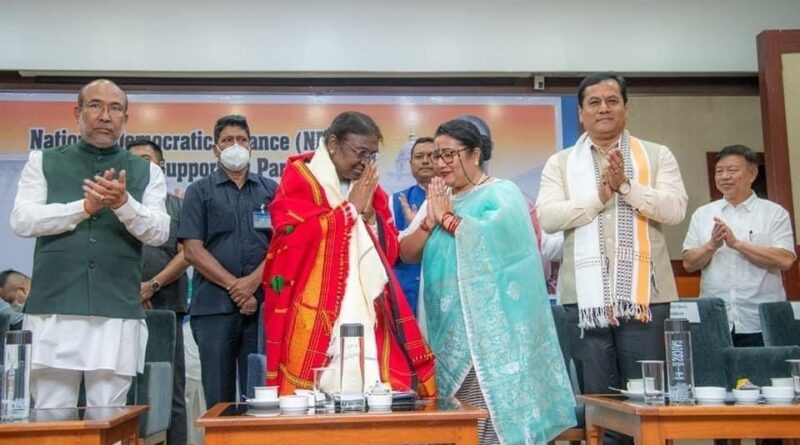 Guwahati/Shillong, July 6 NDA presidential candidate Draupadi Murmu who is on a visit to the northeastern states as part of her campaign for the July 18 Presidential poll has received a rousing welcome in all the states.

Murmu — the first woman tribal leader to contest for the country’s highest constitutional post, visited Tripura and Manipur on Tuesday and then went to Assam late on Tuesday night.

From Guwahati, the 64-year-old Murmu went to Shillong on Wednesday.

In all the states, Chief Ministers and other seniors ministers along with leaders received her at the airports while artistes from different communities welcomed her with colourful traditional performances.

According to sources, Murmu held a series of meetings with the ministers, MLAs and MPs of BJP and its allies in the northeastern states and sought support for her candidature.

Union Minister of State Pratima Bhowmik also accompanied Murmu, who was also the minister in Odisha, and governor of Jharkhand.

Supporting the candidature of Murmu, Meghalaya Chief Minister and NPP President Conrad K. Sangma tweeted: “Meghalaya extends its support to NDA’s Presidential Candidate, Smti. Draupadi Murmu Ji. As a tribal community, it will be our honour to offer our support to India’s 1st Indigenous Tribal Woman as our country’s President.”

“As President, Smti. Draupadi Ji will represent a New India. She represents hope for every tribal, every girl, every woman, and will carry with her the aspirations of small communities of India. We are proud of her & wish her all the best for the upcoming Presidential Election,” Sangma said in another tweet.

“Held a meeting with all the MLAs of BJP-led Govt and Hon’ble MPs of both Lok Sabha and Rajya Sabha today and deliberated on the preparation for the upcoming Presidential election. We are confident that, Smt Draupadi Murmu Ji will become the next President of India,” Singh tweeted.

Before the meeting with all MLAs and MPs began, Murmu led a condolence prayer of the victims of the recent landslides in Noney district of Manipur by observing one-minute silence, the Chief Minister said.

Unlock 2: The definitive list for all you can & cannot do