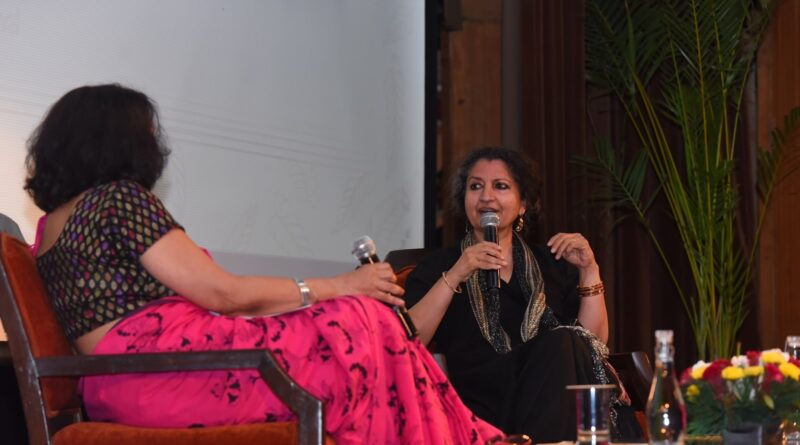 New Delhi, July 6 A celebratory evening with the International Booker Prize winner Geetanjali Shree which featured a conversation between Shree & writer and journalist Poonam Saxena on Shree’s acclaimed novel, ‘Ret Samadhi’/ ‘Tomb of Sand’ was organised by Teamworks Arts on July 5 at the India Habitat Centre in the national capital.

The discussion was introduced by the author and co-director of JLF Namita Gokhale.

The conversation began with the author reading out an excerpt from ‘Ret Samadhi’. During the discussion, she noted that she is still processing the experience after having won the International Booker Prize 2022. As a writer, Geetanjali Shree said that she has learnt that “language is an entity by itself” and that it is “the power of language that takes over and makes one write”.

She added, “Words open up meanings and literature allows you to think new.” About the book, Shree asserted that the theme is also about partitions that emerge in one’s life and that the novel finds its own voice and stories as it goes along — it certainly becomes a novel about partitions, borders, bridges.

While introducing the discussion, JLF’s co-director, Namita Gokhale, said, “We, at the Jaipur Literature Festival, believe in the strength, the beauty and the diversity of the Indian languages.”

She also talked about the importance of literary translation and that Jaipur Bookmark, over the years, has worked on numerous translations.

Managing Director of Teamwork Arts, Sanjoy K Roy, talked about Geetanjali Shree winning the International Booker Prize 2022 and he said, “This particular award does need a celebration for so many different reasons.”

Further, in the discussion, Shree spoke of her path-breaking saga of an octogenarian woman’s search for the past that she left behind and the myriad themes that the novel ‘Ret Samadhi’/ ‘Tomb of Sand’ encompasses.

With murmurs of elections, Haryana leaders are in drive mode