Agra, July 6 In a shocking incident, three members of a family, including a minor girl, were found hanging in their house on Wednesday morning.

All the three had allegedly died by suicide.

The deceased have been identified as Sonu, his wife Geeta and eight-year-old daughter Shrishti.

The ten-year-old son of the family Shyam is the sole survivor.

The bodies have been sent for post-mortem.

According to family members, Sonu had married Geeta about 15 years ago and lived separately in the Awas Vikas Colony.

About six years ago, Sonu met with an accident and then started working in his father’s business. He stopped working when the pandemic set in and was living in his parent’s house.

His parents used to bear the expense of his family and Sonu had discontinued the education of his children.

Sonu’s mother told the police that her grandson Shyam came down in the morning and refused to go back. When asked, he said that his father, mother and sister were hanging by a rope.

“We went and saw them hanging after which we informed the police,” she said.

A police official said that the son was not talking about the incident. It was intriguing that he was not a part of the suicide pact. 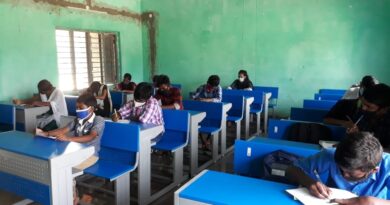 RTE admissions in UP touch a new high

BSP not to ally with Congress in MP, Rajasthan: Mayawati

Absent teachers: Not as big a problem as we think