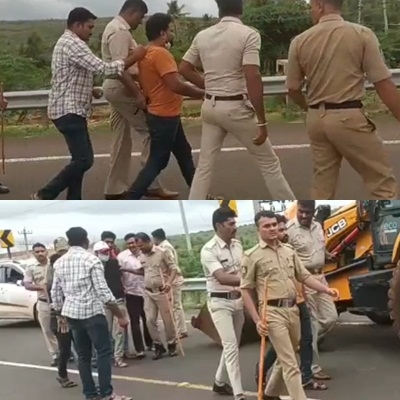 Hubballi (Karnataka), July 5 The police in Karnataka have arrested two persons in connection with the murder of ‘Sarala Vaastu’ fame Chandrashekar Guruji at a hotel in Unakal near Hubballi earlier on Tuesday.

The police managed to arrest Manjunath Dummavada and Mahantesh Shirur — within four hours after Guruji was stabbed to death, from Ramdurg town in Belagavi district.

Both hail from Kalaghatagi taluq of Dharwad district. Manjunath was a former employee with Guruji. Mahantesh’s wife Vanajakshi — detained for questioning, had also worked for Guruji.

The alleged killers were trying escaping to Maharashtra after committing the crime.

Police teams after gathering information about accused persons travelling in the bordering district of Belagavi tracked them down and nabbed them.

Guruji of ‘Saral Vaastu’ fame was stabbed to death in Hubballi earlier on Tuesday. The assassins had come disguised as his devotees to a private hotel in Unakal near Hubballi city.

According to the police, the culprits took Guruji’s blessings by touching his feet first when he was at the hotel reception. Catching him unawares, the miscreants then stabbed him repeatedly.

Police said that Guruji has been stabbed multiple times on chest and abdomen. After Guruji collapsed in a pool of blood, the assailants escaped from the spot.

The incident took place in broad daylight in front of guests at the hotel.

Police said Guruji has been stabbed more than 60 times on his chest and abdomen repeatedly.

The incident caused horror as the chilling footage of the act came out in public domain and went viral on the social media, shocking the people.

Preliminary investigations have suggested that persons known to Guruji may have committed the crime.

The police have taken Vanajakshi, a former employee of Sarala Vaastu Company run by Guruji, into custody to question her, according to sources.

The police have identified the killers as Manjunath Dummavada and Mahantesh Shirur. Manjunath was a former employee. Mahantesh’s wife Vanajakshi — detained for questioning, had worked for Guruji.

Hubballi and Dharwad Police Commissioner Labhu Ram has rushed to the spot and monitoring the investigation. He said 5 special teams have been formed to nab the killers and investigation would be conducted by an officer of the rank of ACP.

Police said Guruji was stabbed more than 50 times. The police are gathering information from the CCTV footages. The motive of the killing is yet to be ascertained.

Chandrashekar Guruji was one of the most popular vaastu experts. He had regularly featured on television and was one of the known faces in the state. Further investigation is on.

Police sources explained Guruji had bought properties in the name of former employee Vanajakshi. His firm suffered losses due to Covid pandemic. Guruji had asked Vanajakshi to return certain property to him.

However, Vanajakshi’s husband did not want to return any property to Guruji.

Guruji was pressurising them to return the property to him and killed for the same reason, police sources said.

Chief Minister Basavaraj Bommai, Home Minister Araga Jnanendra and Minister for Revenue R. Ashok paid their condolences to the brutal killing of Guruji and had earlier assured that killers would be nabbed at the earliest.

Speaking to media persons Bommai said, killing of Guruji is a heinous and unfortunate act. “It has been clearly captured in the CCTV footage. The motives for the murder would be known only after the investigation.”

Twitteratti give thumbs up to odd-even, few brickbats too