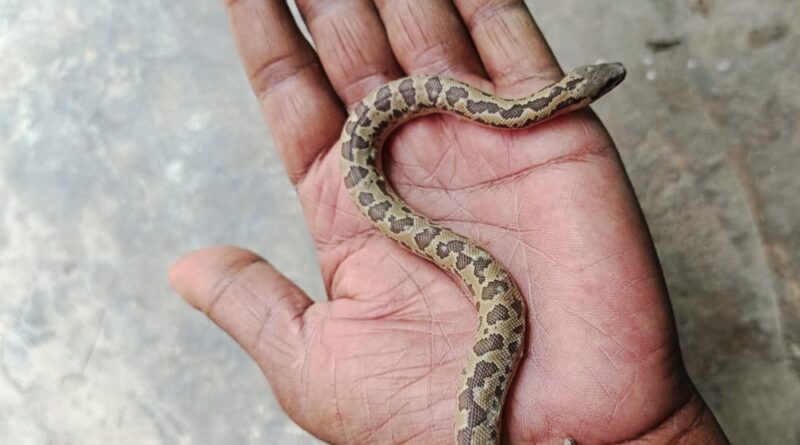 New Delhi, July 5 The arrival of monsoon has also drawn out the city’s reptilian population with as many as 20 reptiles getting rescued in a span of three days from across Delhi-NCR.

Two Indian rat snakes were rescued from synthetic nets in two separate situations. One of the rat snakes was found entangled in a net inside a farmhouse in Gurgaon’s Kapashera border. On spotting the distressed reptile, security personnel quickly alerted Wildlife SOS on the 24×7 rescue helpline (9871963535) for help. In another incident, a nearly 5-foot-long rat snake was found entangled in a net near a park in the Yamuna Bank police station area.

In both cases, the Wildlife SOS teams safely extricated the snakes which are currently under medical observation and would be released once declared fit by the veterinarians.

Of the three monitor lizards rescued by the Wildlife SOS rapid response unit, one was found inside a residence at Shyam Vihar in Najafgarh. As soon as the team reached the location to rescue the lizard, the animal jumped into a water tank. It took the team nearly 30 minutes to finally extricate the reptile.

In another incident, five baby common sand boas were found inside the Delhi Jal Board office in Jhandewalan. Two more sand boas were rescued from a house in Lodhi Railway Colony and from a sewage pipe in Okhla Phase I, respectively.

The rescue of a cobra from an Indian Oil plant in the Madanpur Khadar area and another from a DDA apartment in Dwarka wrapped up the rescue ops.

“Synthetic nets found in gardens and fields are a bane for wild animals, especially reptiles, and are capable of causing severe fatalities. Unsuspecting wildlife on being entangled or trapped in them can die from suffocation.

“We have rescued several snakes such as cobras, rat snakes and rock pythons from such situations in the past. It needs extreme caution to untangle the net without hurting the snake,” Kartick Satyanarayan, Co-founder and CEO, Wildlife SOS, said.