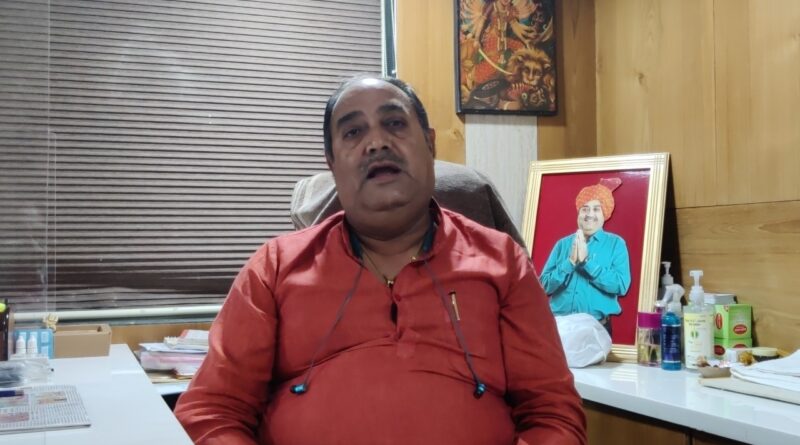 Ahmedabad, July 5 Water-logging and traffic jams are two major issues in Ahmedabad city, for which all the MLAs have to spend the maximum budget. In the MLA Report Card series, IANS spoke to Kishore Chauhan, two-term BJP MLA from the Vejalpur constituency, who talked on a host of issues.

“From 2012 to 2022, I have been the MLA of this constituency. The basic problems when I got elected were drinking water and water-logging due to rain. I have made efforts to make water reach all the societies of all the wards. All the wards have a water distribution centre now and all the areas are getting water from the Narmada. I have improved drainage systems in my area,” Chauhan said.

“Under Mukhyamnatri Swarnim Gujarat Scheme about 99 percent of societies have got RCC roads. All the roads have enough streetlights, and all the wards have gardens now. Juhapura, Muqtampura and Vejalpur wards fall in my constituency. These areas used to suffer from 3 to 4 cm high water clogging for 3 to 4 days in the monsoons as these are lower level areas. We developed 2 water pumping stations and started drainage lines so that the water directly flows in the river,” he added.

“I have helped people with almost 2500 homes under mukhyamantri and pradhanmantri awas yojna schemes. I can say we succeeded in providing this area with overall development. We are going to have an overbridge connecting to Sarkhej at a cost of Rs 350 crore. We also have overbridges and under bridges near railway junctions in my area. We are also going to have two new bridges. Thus, we are trying to completely solve the traffic issue. We have built swimming pools, community health centres, primary schools, and anganwadis. We aim to convert all the primary schools of our area into modern schools. We have got 4 modern schools now. We have made joint efforts with NGOs, corporators and my budget to create semi smart schools in all the government schools of my area.

“Sarkhej is a little bit of a desolate area. It had an MLA from the opposition party after it got merged in the AMC, though we are trying now to provide all the facilities in that area, we are also building a lake in Sarkhej area. During the pandemic we distributed ration kits, food packages and medicines for the poor people.”

Shantilal Rathod, a resident of Vejalpur, told IANS that he has been living in the area since the last 15 years. Kishor Chauhan has facilitated all the residential societies with paved blocks. We get help regarding macard, Aadhar card, and all the government documents from his office. He also brought solutions for water issues. He always remains accesible to the public.

Vishnu Desai told IANS: I am living in a slum area of Vejalpur, but now we have all the basic facilities in our area, now it doesn’t look like a slum. Kishorbhai visits us and even calls us frequently. We can call his office anytime for any document related work. He started medical camps during the lockdown, and he distributed food and medicines to the poor, he also helped the people with hospital beds during the pandemic.