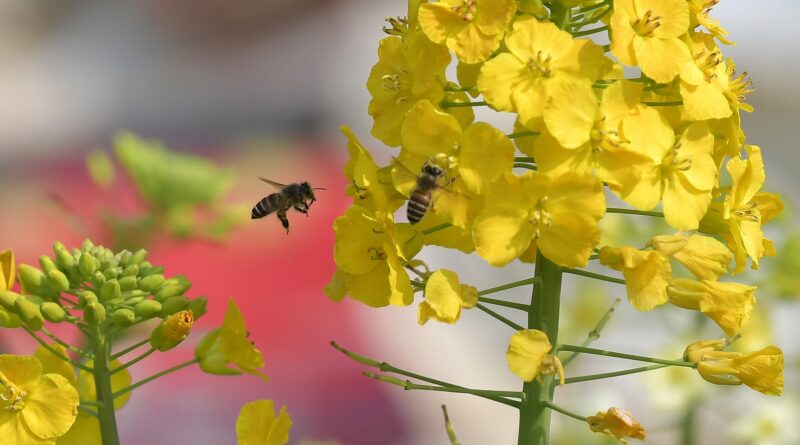 By Vishal Gulati
Shimla, May 29 The hard working wild bees and other pollinators play a crucial role in maintaining the ecosystem and are precious allies of the apple cultivators in Himachal Pradesh, which constitutes 89 per cent of the state’s fruit economy. But now there is a noticeable decline in the population of the pollen carriers due to the humans’ negative impact on the environment.

Researchers at the Dr Y.S. Parmar University of Horticulture and Forestry in Nauni near Solan town have been advocating the rearing of commercial bumblebees, a native species, to restore and enhance the role of bees and benefit the farming community by spiking the crop yield.

India has over 48 species of bumblebees in the wild and efforts are underway in the state to utilize them for pollination.

The state is one of the biggest producers of fruits in the country with nearly 2.5 lakh hectares of land under fruit cultivation. Keeping this in mind, the process of pollination by bees becomes very important.

“The bumblebee is an important pollinator and plays a crucial role especially in the hill states like Himachal Pradesh that is the country’s major fruit basket. We are developing a technology for commercial rearing of bumblebees that could increase fruit productivity up to 25 per cent,” scientist R.K. Thakur, head of the Department of Entomology, told IANS.

The department initiated bumblebee rearing in 1998. “The university is developing technology and knowledge from Israeli counterparts to overcome constraints like year-round rearing of queens of bumblebee, mating and hibernation technology under controlled conditions, and tackle the incidence of different diseases and pests,” he said.

According to Thakur, the modern houses in the rural areas leave little space to host bees and other pollinators are also responsible for their massive decline in the wild.

The Food and Agriculture Organization of the United Nations (FAO) in celebration of World Bee Day 2022, which falls on May 20, warned of declining pollination services in many parts of the world.

Thakur said the bumblebee can be domesticated at lower elevations of this hill state.

“In polyhouses of Haryana, the bumblebee is playing a crucial role in pollination for crops of tomato, brinjal and bell pepper, besides floriculture,” Thakur said.

Himachal Pradesh supports four species of the bumblebee; two of them can be domesticated.

Owing to the decline in the honey bee activity in nature, apple growers have started placing bee colonies in their orchards.

During the flowering season of apples, cherries, strawberries, almonds and other fruit crops, the orchardists place bee colonies in the orchards for pollination from March to end of April.

They are hiring beehives from Haryana, Uttarakhand, Punjab and Uttar Pradesh at the rate of Rs 1,200 to Rs 1,500 per hive. At least four boxes of beehives are required per hectare.

Nakul Khimta, an apple grower in Kotkhai in upper Shimla, the hub of apple orchards, said: “For the past many years we have been hiring hives of bumblebee for pollination and the results have been encouraging with the overall increase in crop production owing to optimum size, besides the fruit quality.”

He said in the traditional houses there was space to keep indigenous bees. Now they have declined in abundance.

“With hard working Italian bee species not easily available with government agencies and beekeepers, most of the growers now depend upon bumblebees for pollination in orchards,” added another grower Bobby Chajta.

According to FAO, beekeeping is an activity that goes beyond honey production and contributes to the achievement of many Sustainable Development Goals (SDGs).

Since it can be done with limited resources and locally available materials, beekeeping provides a source of income for those living in extreme poverty, helping to improve the resilience and livelihoods of rural and indigenous communities.

Last week an Israeli delegation led by agriculture attache Yair Eshel visited the Dr Y.S. Parmar University of Horticulture and Forestry under the Indo-Israel Agricultural Project that aims at commercial rearing of the bumblebee.

University Vice-Chancellor Rajeshwar Chandel said Himachal Pradesh is home to a diversity of flora that is preferred by the native bees, especially bumblebees that are effective pollinators.

He told IANS that the university has done pioneering research in rearing bumblebees and now it is time to take a leap regarding collaborations with institutions so that the quality and quantity of farmer’s produce can be increased.

Under the Indo-Israel Agricultural Project, MASHAV, Israel’s agency for international development cooperation, has established a centre of excellence for beekeeping in Ram Nagar in Haryana for demonstrating honeybee management.

Himachal CM to voice opposition to shifting of ARTRAC