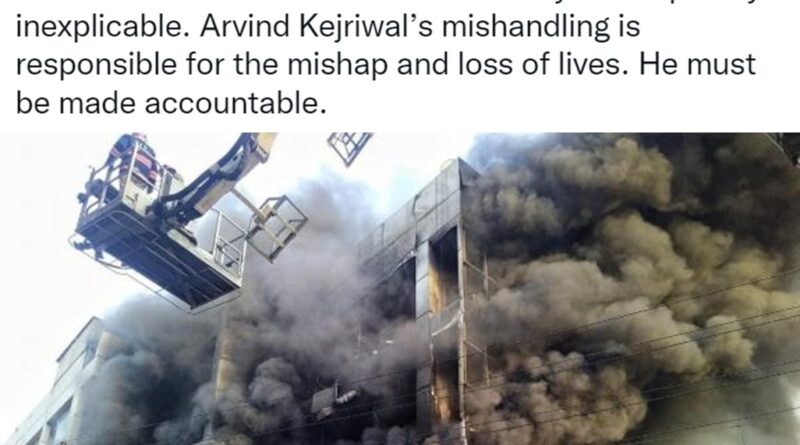 New Delhi, May 15 Hitting out at Delhi government, the BJP alleged that Chief Minister Arvind Kejriwal’s mishandling is responsible for the mishap and loss of lives in the Mundka fire.

The BJP also said that the devastating fire that claimed 27 lives could have been averted or contained had the fire tenders arrived on time.

In-charge of BJP’s national information and technology department Amit Malviya tweeted, “The devastating fire in Mundka that claimed 27 lives could have been averted or contained had the fire tenders arrived on time. 1.5 hours delay is completely inexplicable. Arvind Kejriwal’s mishandling is responsible for the mishap and loss of lives. He must be made accountable.”

In a recent development in the Mundka fire incident case, Delhi Police on Sunday arrested Manish Lakra, the owner of the ill-fated building that was gutted in the fire two days ago.

Lakra, a resident of Mundka village, resided on the top floor of the building and went absconding after the incident that claimed the lives of 27 people. However, it is yet to be learnt whether or not he was present in the building at the time of the incident.

The building had Ground plus three floors. The ground, first and second floors were occupied by a single company whose owners — Harish Goel and Varun Goel — were also arrested. Most of the people, at the time of the incident, were present on the second floor of the building.