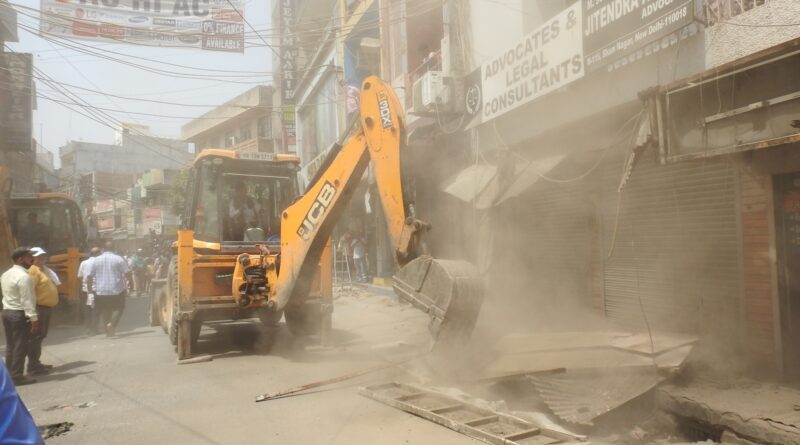 By Lavanya Ballal
The BJP has time and again used the issues of food, clothes, religion and language as a symbol of righteousness. The party has also used these sensitive and emotional aspects to crush the nation’s voice.

Currently, India is seeing the era of bulldozers, as the BJP is using them to literally raze houses and buildings across India. Delhi also saw the demolition drive.

The world saw people desperately pleading near the bulldozers to save their homes, media anchors clambering atop it for better TRPs, and it got instant international fame with Boris Johnson climbing onto it during his India visit.

Apparently, 63 lakh dwellings will be demolished in this demolition drive in the national capital.

Meanwhile, BJP leaders have been demanding similar bulldozer drives in Karnataka and other BJP-ruled states as well.

When the ruling dispensation claims it to be an anti-encroachment drive to remove illegal structures, the issue is not in black and white. The demolition drive in Jahangirpuri in Delhi continued even after the Supreme Court ordered status quo.

Largely, bulldozers are being seen as the weapon of fascism in the nation. The weaker sections of the society see it as the latest tool of oppression.

Theoretically, it’s a good goal to have — a nation free of illegal encroachments — but is it possible in reality? Most Indian cities see people breaking the urban planning rules and regulations while constructing houses. Why do officials ignore illegal structures? Is it because of corruption or is it a problem that’s too big to solve?

If homes and businesses are destroyed, how will citizens live? How will they educate their children? What kind of social security has the government planned for the people who have become homeless due to the demolition drives?

The BJP in its drive to win more states forgets that all Indians are equal, they all have constitutional rights and they all need to be treated equally.

The BJP in its short-sighted view demonises a section of the society, and keeps fanning the fear in the rest of the population. Its hyper nationalism makes it treat citizens who disagree with its illogical plans like anti-nationals.

Unless this hyper nationalism and greed for power is curbed, India will see dark days.

The founding fathers of our nation while framing the Constitution were careful in ensuring that every last citizen’s rights are protected. Today, the BJP seems to have forgotten that housing is one of the basic rights of every Indian.

The goal must be housing for all on priority basis, and later once every citizen has a house, focus could given on demolition of illegal structures.

(The writer is the National Coordinator of Congress’ Social Media Wing)

Don’t include me in cabinet, Jaitley tells Modi