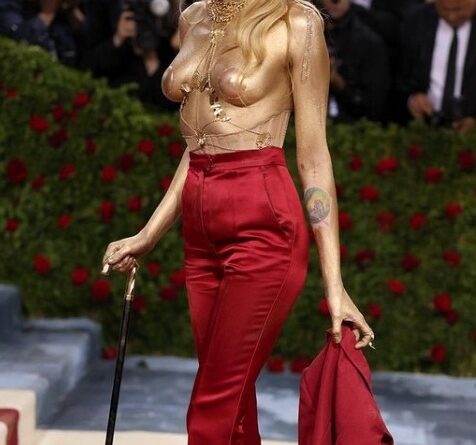 Los Angeles, May 3 Model-actress Cara Delevingne’s make-up was hidden under her clothes as she stripped off at the star-studded Met Gala event.

She stepped out in a red Dior Haute Couture suit complete with a walking stick and platform heels in matching color. She then took everyone by surprise as she took off the jacket and revealed her naked chest covered in shimmering gold body paint, reports aceshowbiz.com.

The 29-year-old wore only a pair of gold covers to protect her modesty and accessorised with a series of gold chains that extended down her bust in suspenders of sorts.

She cheekily stuck out her tongue while posing for photographers after going topless.

Delevingne had her long blonde hair styled in loose waves. She also had hoards of rhinestones glued to her eyes in a cateye shape with shimmery shadow swiped across her brown bone.

Delevingne has attended the Met Gala since she made her debut in 2011. Last year, she made a statement with her Dior number which had the phrase “peg the patriarchy” emblazoned across her chest.

Superstar Dileep collects passport from court for travel to Dubai