Lucknow, Nov 3 (IANS) The building of check dams in the water scarcity regions of Uttar Pradesh can be a permanent solution to easing the water woes in these areas. Though, the average rainfall in the Bundelkhand region ranges from 800 to 900 millimetres (mm), if this water is properly utilised it can transforn the lives of farmers here.

The government is addressing the problem of water scarcity in Bundelkhand by constructing check dams. With this the problem of droughts in the affected areas will almost end.

The geographical structure of Bundelkhand is the biggest obstacle in its water management. Due to low lying-high plateau lands, most of the rain water percolates down into the rivers. The land in Bundelkhand still remains dry and arid despite availability of plenty of water. This is the reason that Bundelkhand had suffered 11 droughts in the last two decades.

Despite plenty of water, Bundelkhand’s only effective permanent solution to combat drought is to save every drop of rain water in natural water sources such as rivers, ponds, lakes, etc so that it can be used for irrigating fields and for drinking by cattle.

Quenching the thirst of the fields and people of Bundelkhand is the topmost priority of the Yogi government. After coming to power, Chief Minister Yogi Adityanath started the ‘Khet-Talaab’ scheme to turn its intent into reality. In order to provide portable tap water to every household, the ‘Har Ghar Nal’ scheme has been launched by the state government from Bundelkhand.

At the local level, the district administration is making similar efforts by building check dams. For instance, under Jhansi’s Minor Irrigation department, 47 and 9 check dams were built in Bundelkhand and Jhansi districts respectively in the last three years.

Due to the availability of water throughout the year, two crops are cultivated in the area. Some farmers have also started cultivating those vegetables which yield more profit instead of traditional farming. Groundwater levels have also increased due to which most of the farmers are happy.

Purushottam from Gadha gram panchayat, Gursarai block in Jhansi, said, “You are talking about irrigation. We did not even have adequate water for bathing and drinking but now the situation has changed. Since two check dams were built near the village, cultivation of two-crop system is being promoted. We irrigate the fields easily with installation of pumps and during summer, our cattle no longer remain thirsty.”

Jitendra Singh, a resident of Jhansi’s Itwakurd gram panchayat of Chirgaon block, said earlier they used to have only a few kharif crops depending upon the rains. Crops which required less water such as peanuts and urad dal (pulses) have now changed with the building of check dams. Now they also cultivate crops such as mustard, gram, peas, potatoes and wheat as the water in the dam is available till January.

Mahendra Singh of Barei village in Jhansi said, “Earlier there was almost no water but with the formation of check dams, water is available till February-March so we are sowing both rabi and kharif crops. During the rabi season the water problem arises only during the last stage of irrigation. This problem can also be solved by increasing the depth of the dam and drawing water from nearby.”

Baldev Singh Aulakh, Uttar Pradesh Minister of State for Water, said the government will put an end to the shortage of water in Bundelkhand. Farmers will greatly benefit from building check dams which will improve the water level. 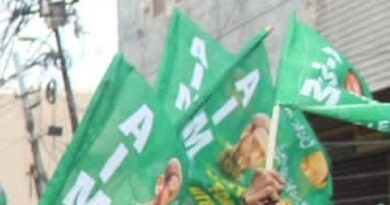 AIMIM to give a fight to Congress in Gujarat