New Delhi, Nov 1 (IANS) The Delhi police failed to find any violators spitting in public on Sunday, a day after one violator was challaned for the violation.
A total of 1,781 challans were issued to those who were found not wearing masks, zero challans for spitting and 53 challans were issued to those found violating social distancing norms on Sunday, according to the Delhi police data.
As many as 4,83,575 challans have been issued for various violations till 4 p.m. on Sunday, officials said.
Citing the collective data, the Delhi police said since June 15, 4,46,128 challans have been issued for not wearing masks, 3,186 challans for spitting in public and 34,249 challans for violation of social distancing norms.
–IANS
zaz/sdr/ 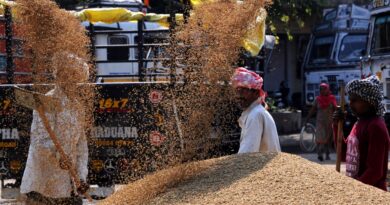 BJD demands to enhancement of paddy MSP to Rs 2,930 per quintal

11th Edition of DefExpo to begin in Lucknow on Feb 5