New Delhi/Islamabad, June 8 (IANS) The recent crash of a Pakistan International Airlines (PIA) plane in which 91 passengers and six others were killed, has led to many in Pakistan pointing fingers at the corruption of the country’s infamous military-industrial complex, which is now headed by the Army Chief General Qamar Javed Bajwa.

Sources in Islamabad said the initial investigations into the state-owned aircraft, which crashed into a residential area near the southern Pakistani city of Karachi on May 22, has revealed that both its engines were defective and it was overall in a bad condition before it took off from Lahore.

The PIA, which was once a profitable airline, has been incurring massive financial losses for last several years and is widely known in Pakistan for delayed flights and abysmally low-grade service.

Sources in Pakistan said that it is because the airline, like many other key businesses, is run by the military as a family affair. The PIA, for example, is headed by former Vice Chief of Air Staff, Air Marshal Arshad Malik, who is the realted to the brother-in-law of Army Chief Bajwa. He took over as the President and CEO of the state-run airline in 2018 soon after Imran Khan became Prime Minister.

While the army chief’s two brothers are currently senior functionaries of PIA posted in Birmingham, UK, his sister-in-law was a former HR chief of the airlines. “Since the plane crash, this is widely being talked about. Many Pakistanis on social media have been asking for the resignation of Air Marshal Arshad Malik. People are also questioning why Army officials get to head and run these institutions,” a Pakistani journalist told IANS.

PIA, however, is not the only institution which is operated by military officials in Pakistan. According to noted Pakistani authors, Hussain Haqqani and Ayesha Siddiqa who wrote extensively on the Pakistani military-industrial complex, over 100 businesses are run by the subsidiaries of five military foundations – Fauji Foundation and Pakistan Ordnance Factory Board Foundation of the Ministry of Defence, Army Welfare Trust of Pakistan Army, Shaheen Foundation of Air Force, and Bahria Foundation of the Navy.

Though all the foundations are registered as charities or societies, their subsidiaries sell everything from cereals to aviation supplies in Pakistan. The military also runs the Special Communication Organisation (SCO), the National Logistics Cell (NLC) and the Frontier Works Organisation (FWO).

While the SCO is responsible for communication networks in Northern Areas and Pakistan-occupied Kashmir, the NLC is a cargo company which owns a large fleet of trucks and sea vessels and FWO constructs the Karakoram highway connecting China with Pakistan. All three have diversified and entered into the civilian market as profit-making ventures. 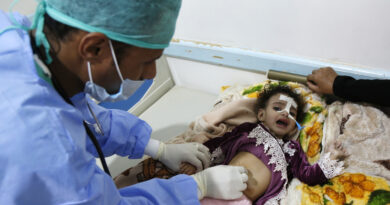