Hyderabad, Oct 25: Victory in the by-elections to Huzurnagar Assembly seat with a massive majority made hardly any difference to the ruling Telangana Rashtra Samithi (TRS) with the party being firmly in saddle, but it shows that the opposition Congress remains in total disarray.

S. Saidi Reddy’s win with a majority of 43,358 votes over his nearest rival Padmavathi Reddy of Congress proved TRS remained invincible, notwithstanding opposition’s impressive show in the Lok Sabha elections.

That the TRS could sweep the by-poll without party president and Chief Minister K. Chandrashekhar Rao addressing a single election rally in the constituency shows that the opposition is no match for the ruling party.

After retaining power with a landslide victory in December 2018, TRS with its massive win in Huzurnagar proved that the huge public support for it has not eroded.

The Lok Sabha polls in April this year had come as a shock to TRS as the Bharatiya Janata Party made huge inroads to win four seats while Congress too bagged three seats to shatter TRS’ dream of a clean sweep.

Out of 2,00,754 votes polled in Huzurnagar, TRS secured 1,13,095 votes while Congress bagged 69,737 votes. The one-sided result proved wrong all predictions of a close-fight.

The BJP candidate finished a poor fourth with 2,639 votes. In fact, an independent candidate polled more votes than the BJP. The party was never a force in the constituency and it garnered only 1,555 votes in 2018.

The Telugu Desam Party (TDP), which had stayed away from Lok Sabha elections after facing the drubbing in Assembly polls, fielded its candidate in Huzurnagar in a bid to show that it exists in Telangana. The party came a distant fifth with just 1,827 votes. Both BJP and TDP forfeited their deposit.

The result is more shocking for Congress as the party was humiliated on state Congress chief Uttam Kumar Reddy’s home turf. It was a double whammy and personal blow for him as his wife had contested as the Congress candidate.

Uttam Kumar Reddy, who had retained Huzurnagar seat for a third consecutive time in 2018, vacated it following his election to Lok Sabha from Nalgonda constituency. The party had never lost the poll in this constituency ever since it was carved out in the delimitation of constituencies in 2009.

The Congress had huge stakes in the by-election as by retaining, it wanted to teach a lesson to TRS for “buying” its 12 MLAs. The defections and Uttam Kumar Reddy’s resignation had already brought Congress’ tally down to six in 119-member Assembly. As a result of this, the party also lost the status of main opposition party in the House.

Winning Huzurnagar was important for Congress not only to improve its tally to seven to claim back the status of main opposition but also to put moral pressure on the 12 defectors to quit and seek fresh election.

“All the defections took place on the premise that constituencies held by opposition won’t get funds and lag in development. The voters in Huzurnagar may also have thought on similar lines and votes for TRS expecting a boon,” political analyst Telakapalli Ravi told IANS.

He believes that the failure of Congress and the disunity in the party which helped TRS win the by-election with huge majority.

The anlyst feels that Uttam faced anti-incumbency in Huzurnagar and sabotage from within the party. Notwithstanding the unity shown by top leaders during the campaign, the Congress in Telangana remains a divided house.

The party has been witnessing internal squabbles since the Assembly elections. Several leaders openly targeted the leadership of Uttam Kumar Reddy and party’s in-charge for Telangana R.C. Khuntia.

The two leaders came under attack over choice of candidates. They even complained to the central leadership against them.

However, with party’s central leadership itself facing a crisis post Lok Sabha elections, no attention was paid to set right the affairs in Telangana.

A section of party leaders believes that with his failure to ensure party’s victory on home turf, Uttam Kumar Reddy is on his way out as the state party chief.

China renames 15 places of Arunachal Pradesh in its map 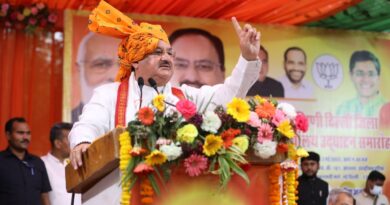