Moscow, Sep 8 (IANS) Russia has opened an alternative event for national Paralympians banned from the Paralympic Games in Brazil’s Rio de Janeiro.
“The Paralympic sports in Russia will continue receiving support, attention and care on behalf of the authorities,” Russian Sports Minister Vitaly Mutko said at the official opening ceremony of the alternative games organised just outside Moscow here on Wednesday, reports Tass.
“We all know well how much hard work it required from all of you personally, your coaches, the RPC (Russian Paralympic Committee), your friends and relatives to prepare for Rio,” Mutko said
A total of 263 athletes are taking part in the event, competing in 18 sporting categories.
“I feel very sorry that you are unable to take part in this holiday of sports (in Rio), but we will imply maximum of our efforts to return to the global Paralympic family as soon as possible,” Mutko added.
“Many international federations did not support the decision of the International Paralympic Committee (IPC). The Paralympic sports in Russia will continue receiving support, attention and care on behalf of the authorities.”
RPC President Vladimir Lukin said addressing the opening ceremony, held at Moscow’s Crocus City Hall, that during the “All-Russian Competitions” all political issues must pale into insignificance.
“The politics will be aside during the competitions. Apart of everything, this this a holiday, which is the holiday of the establishment and development of the Russian Paralympic movement and the holiday of determination and desire to achieve success at any cost,” Lukin said.
“Let the God be the judge for all those, who used to say that everything is all right with us and then barred us from the Paralympic Games,” he said.
The RPC president added: “We are all sending our sincere greetings to the Paralympics in Rio de Janeiro since we are all brothers and sisters and in the Paralympic family and wish that the Games there will be good.”
The International Paralympic Committee (IPC) barred the entire Russian Paralympic team from taking part in the 2016 Paralympics in Rio de Janeiro, Brazil, on August 7. The Games began on Wednesday and will continue till September 18.
Russian President Vladimir Putin announced last week that Russia would organise alternative competitive events on September 8-9, for the barred Russian Paralympic team and the awards for the athletes would be equal to those promised at the 2016 Rio Games.
–IANS
sam/dg 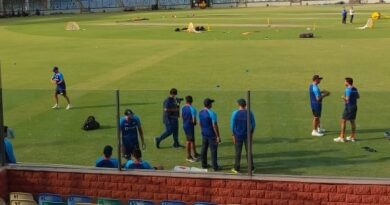